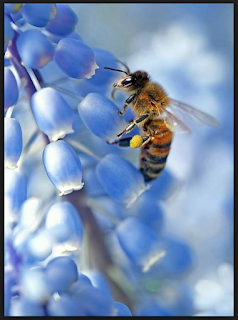 Telling the Bees is the closing track on the album and is therefore the final episode in our series of blogs.


I wrote the music first which was inspired by the title. I find having a title helps to set the mood and instrumentation of the piece within my imagination. It's like having a final destination in mind. Telling the bees is a traditional bit of folklore surrounding bee keeping. There is also a notable poem with the same title written by John Greenleaf Whittier. My version is inspired by the folkloric tradition rather than Whittier's poem.

I wrote Telling the Bees on a 12 string acoustic guitar, tuned to DADGAD with a capo on the 6th fret - which makes the tuning G#D#G#C#D#G#. The reason I used the capo was to make sure that my voice had a yearning quality to it. (Budding songwriters please take note - always make sure that the key of the song you're writing, shows off the singers voice to their best advantage!) Although be warned that guitarists may curse your name forever for doing so! I had also updated my DAW during the summer of 2014 and this was the first piece of music that I'd written with it.

I had the melody, the chords and the arrangement down quickly. The chorus words are simply the title of the song repeated over and over. I then lived with it for a few weeks and let the story of the song settle in my mind. Songs have a habit of being ready when they're ready to reveal themselves. Some songs happen quickly while others take their time to fully emerge. You can rush these things but in my experience, if you can, let them unfold as they will. It's good to have the external stimuli of a production deadline but make sure that you give yourself the time to think about the words thoroughly, or you may regret it later.

When I began to write the lyrics for this song, I imagined the first verse being set towards the end of the First World War. Many events happened in the UK to commemorate WWI during 2014. We are all creatures of our time and so these life events either consciously or subconsciously impact upon the subject matter of the songs that Greg and I would write to make up Folklore.

In the song narrative, a grieving war widow tells her son that he now must 'tell the bees' of his fathers death and also that he must pick up the mantle and become the next beekeeper. I like the idea that these traditions would keep on being passed down the generations. This of course is a very strong theme of the Folklore album and it also links back to themes of the English Electric recordings. 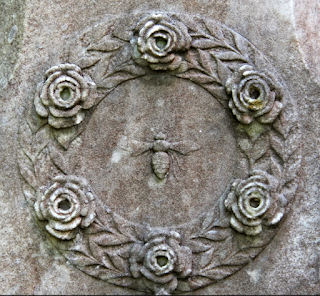 This song has a sense of the passing of time and of course, significant life events come and go throughout the years. Now the father is gone, the boy has had to become the man who carries it on. Years later he meets a girl, they marry, they have a son and so once the child has grown up - he too may choose to carry it on. It is a simple lyric about the human cycle of life, death and rebirth.

The "1,2,3,4..." count in is my voice being picked up by my 12 string guitar mic. We liked it and so it stayed in the final mix. Oddly enough this count in would have been the very first part that I recorded at the demo stage of the recording process. The initial moment captured and preserved.

When Greg and I were going through what we had and what we needed in terms of songs for Folklore, I played him my demo of Telling the Bees. He liked it and he instantly said that his initial thought was that it would make a strong final track for the album. As the music is written and recorded the final pieces start to be drawn together as a cohesive body of work, jostling for their final positions in the album running order. Telling the Bees has remained the final track.

Danny Manners brought the Prog to this song with his gorgeous Mellotron choir part at the end which makes the track lift as though being somehow exalted at the final chorus. He also slips in a cheeky little piece of Rimsky Korsakov's Flight of the Bubble Bee in the organ embellishments just before the end of the piece.

To conclude my post, I have included an old clipping [below] from a local paper which perhaps may go towards showing that there is more truth in the folklore of Telling the Bees than at first meets the eye. 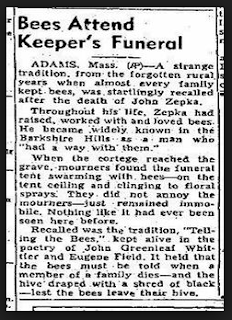 We (Greg and I) hope that our 'Folklore' blogs have been a useful source of information in the build up to the release of Folklore. As always, there are more stories to tell and sure enough, we are currently working on a follow e.p which will be called Skylon, which is due for release in April 2017.

Thank you for the support that you have given us on our latest endeavour. It is greatly appreciated. Until next time...