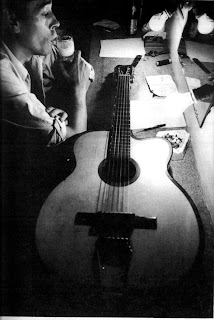 I'm getting ready to drive down to Aubitt in Southampton UK at the end of July to record vocals, mandolin, accordion, flute, banjo etc for Big Big Train's Far Skies Deep Time e.p. I can't believe it was a year ago when we did the sessions for The Underfall Yard.
How time flies.
So, it's time to restring the mandolin and do vocal warm ups once again.
Posted by David Longdon at 04:52 No comments:

I'm very pleased to announce that my old Louis Philippe band amigo Danny Manners has contributed some double bass playing to British Racing Green. A song which will feature on our forthcoming Far Skies Deep Time e.p
Danny's bass parts were recorded by Ken Brake at Regal Lane Studio, Regent's Park, London, UK. I've received glowing reports from Andy and Greg concerning Danny's performance on the track.
I first met Danny when Philippe asked me to join his band in order to play some live dates in London and Paris.
My first album with Louis was Jackie Girl. The album also features Dave Gregory. It is where Dave and I first met each other.
Working with Louis and Danny is always an educational experience. I've learned so much about harmony, melody, musical arrangement and recording techniques.

Danny taught me to listen carefully to the harmonic details and dot the i's and cross the T's. He also introduced me to Gentle Giant.
Danny is not only a fabulous bass player he is also a beautiful pianist. Check out the Louis Philippe Live album and also Louis and Danny's Francis Poulenc album Nusch

I'm delighted Danny is playing on British Racing Green and I think you will be too.