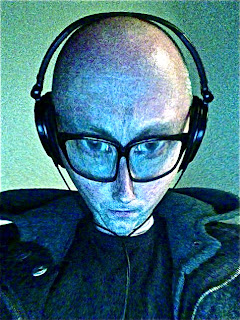 We [in BBT] are planning to meet in Southampton early in the New Year. Nick is once again flying in from the states and we will be recording rhythm tracks for new material including pieces designated for THE BIG BIG THING. I'm really looking forward to getting together again with the band and hearing the new tracks start to come to life.

We are also working on something special that will be available in early 2013 but that is all I can tell you for now!

What a year it's been. EE pt 1 was released back in September and it has been incredibly well received.  Thank you all for the support you have given us throughout 2012.

On a slightly religious note [well it is Christmas!] has anyone else noticed an implied Christ-like face on the cover of EE Pt.1? My friend Simon Withers noticed it and mentioned it to me the other evening. I have to say that I have never noticed it but Simon is an artist, so he spends much of his time either making images or looking at them.

What do you think? Can you see it too?

Q: What's with the ant reference and the ant-like portrait then David?

Well... in November 2012, Andy Tillison [from The Tangent and also recently involved with BBT on English Electric] invited me to contribute vocals and vocal arrangements for the new album by The Tangent called Le Sacre Du Travail. The piece is written by Andy and some of it is influenced by the orchestral works of Igor Stravinsky, especially the Rite of Spring. It will feature musical performances by Theo Travis, Jakko Jakszyk, Gavin Harrison, Jonathan Barrett and me!

Ants are featured in the concept of this album.

With English Electric Part 2 being released in March 2013 and Le Sacre Du Travail coming out later in the year, it looks as though 2013 is going to be busy!

"Although it's been said, many times, many ways...