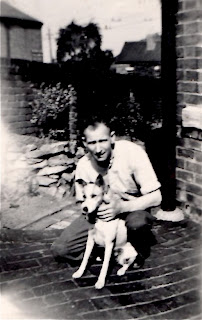 'Uncle Jack knows, a song of the hedgerow'


Uncle Jack is the second song on English Electric part 1.


I wanted to write a song about my Uncle Jack. John Henry Herring was a collier and  he worked in the pits around the Heanor (Derbyshire:UK) area. He spent so much time beneath the ground that he truly valued his time on the surface. Jack would walk his dog (Peg) and would take notice of all that was happening around him in the natural world. The changing of the seasons, birdsong, woodland wildlife and the 'bustle in your hedgerow.'


At Christmas time and for birthdays he would buy me books. The books usually concerned wildlife, birds and the ways of country life. However, there were also books like 'Tales of Mystery and Imagination' by Edgar Allen Poe and the collected poetry of Sir John Betjeman.


Greg, Andy and I were talking one day about possible songs for inclusion on English Electric and I mentioned Uncle Jack and how it is about a colliers love of nature, seasons and hedgerows and Greg said he had been tinkering around with an idea for a song called Hedgerow. That's how it works. One thing leads to another and gradually songs and albums begin to take shape.

The writing of it started before I was in Big Big Train. I had bought an old Windsor banjo that had clearly seen better days but once I had sat down with it, tuned it and began to play, the main riff came within a couple of minutes and the other sections quickly followed. All there under my fingers, fifteen minutes max! It's not always like that... believe me.

I am very fond of My Friend The Sun by Family and Ooh La La by Faces and I wanted  Uncle Jack to have that 'all-together-now-sing-along' feel to it. Verse one concerns itself with how seasons happen on earth and the end 'nursery rhyme' section was just a list of the typical inhabitants you would expect to find within british hedgerows. I wanted Violet and Lily's chanting to have a pagan-like Wicker Man soundtrack flavour. There is also a nod and a wink to my favourite XTC album Mummer.


Uncle Jack is really a personal thank you to my Uncle for all those childhood memories.


The next EEpt1 installment will be courtesy of Greg, when he will reveal the story behind Winchester from St Giles' Hill.