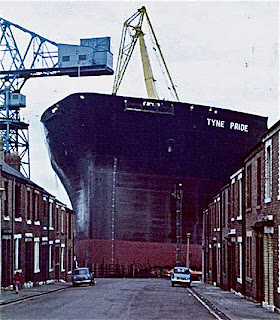 Greetings from a snow covered UK!

Here is my blog for the story behind Swan Hunter, a song featured on our forthcoming album English Electric Part 2.

Swan Hunter is a song about the inevitable changing world and how these changes impact directly upon local communities.

What an awe inspiring picture this is. The name on the ship says it all. Imagine being a child who grew up within this community, in one of those houses. Seeing these huge vessels grow daily until their launch and another would start to grow in its place. Imagine the relentless sound of machinery and construction workers. Your father most likely would have worked there and probably his father before him. It must have been almost impossible back then to imagine a time when this way of life, would come to an end. When it did end, what would the people do? If this is what you know and it has defined your role in life for generations ... 'what do you do, when what you did is gone?'

There is a parallel here between the shipyards and the collieries. When I was a boy I remember my Uncle Jack going off to work. I remember their stories, the community and way of life which had developed around generations of miners. It was how things were. It was the way things happened and it was impossible from within it all to imagine it ever coming to an end. The closing of the pits in the late 20th century would change everything.

This song centres around a main character. Let's call him Jim.  Jim is now an old man and he is reflecting back on his life as a shipbuilder who worked at Swan Hunter in the Neptune Yard. Imagine Jim, sitting by his fireside and recounting tales to his son about how it all once was and how much life has changed. Jim accepts the impermanence of material things and the inevitable passing of time.

Swan Hunter was written by Greg Spawton and I. It was inspired by Big Big Train artist Jim Trainer. Jim sent a letter to Greg a few years ago, which detailed some stories that had happened in the Swan Hunter shipyards. Jim's family had worked in those yards for generations. Greg thought it would make an interesting story and when I wrote the lyrics, once again I endeavored to find the human story of those who worked and lived in the shadow of those mighty imposing machines.

Jim told me that most of the males in his family were called Jim Trainer! Which must have made for interesting moments on Christmas day when they all received their gifts! Jim said that family members would differentiate between their particular Jim by assigning an identified characteristic of the Jim in question, alongside their shared name e.g Big Jim, Little Jim etc.

So with love and respect, BBT would like to dedicate Swan Hunter to Our Jim or as he is known back home, 'Little Jim's Jim.'

More next week but until then ...