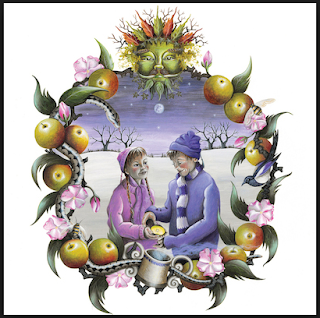 This track was first heard last summer as the title track of BBT's Wassail e.p, which was released to herald the return of Big Big Train to the live stage. The e.p featured a beautiful cover (above) painted by Folklore artist Sarah Louise Ewing. "It looks like a Christmas card!" remarked Team Rock Radio's cheeky Phil Wilding when he interviewed Greg and Danny live on his radio show during the height of summer! He did have a point. Ideally it would have made a good Yuletide release but because it had been a while since the English Electric albums, we thought that the fans would enjoy having some new music from the band to whet their appetites in advance of our live shows.

An explanation of what Wassail means was given in the sleeve notes of the e.p and it has been mentioned in various interviews that Greg and I have done over the last year. If by chance you have not seen or heard them, I've included a couple of links within this paragraph - Wassail is an English pagan ritual that was performed in apple orchards in England in order to ward off evil spirits and bless the trees so that they would yield a bountiful crop. I understand that it is making a bit of a come back. 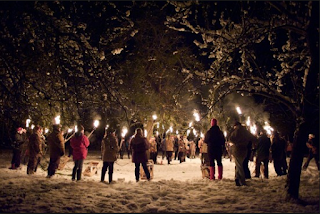 The drum tracks for Wassail were recorded at the end of our Stone and Steel sessions at Real World during the summer of 2014. We had booked a day to record drums for material that would become Folklore. Months earlier during one of our epic phone calls Greg and I discussed song ideas that we had and I mentioned Wassail. We thought it was good subject matter and I set about writing and arranging the piece. When I programmed the VST drums, I got so carried away playing it that I broke several keys on my MIDI controller keyboard. (Rock 'n Roll! Whoooo!)

I wanted to musically pay homage to some of the great music that has come out of Real World, especially the Peter Gabriel tracks 'Sledgehammer' and 'Steam.' I wanted Wassail to have the huge and present drum sounds that those tracks possess and recording our drums in those studios would give us access to the same acoustic environments. Stone and Steel features the 'Wassail Drum Session' as an extra on the Blu-Ray and it shows Nick performing, Rob and Ollie engineering and me producing the session. 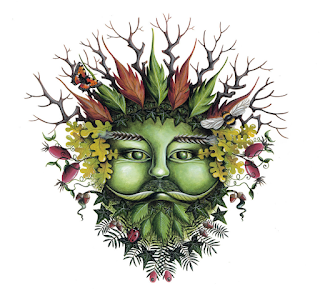 Wassail was written with the idea of it being a 'single.' It is a pagan chant that grooves along and its subject matter is powerful. We loved the image of the green man that Sarah had painted at the top of the frame for the e.p cover, so we asked her to paint another picture, solely of the green man because we thought it would make a strong image for BBT marketing.

During yet another epic phone call with Greg, we spoke about visuals for the forthcoming live shows. We had chosen Wassail as one of the pieces in the set and we spoke about having a mask made, based on Sarah's picture. A week later I was having a conversation with Simon Withers and I mentioned the idea of the mask. Simon has been involved with the Nottingham art scene for years and he instantly recommended Stephen Jon - mask maker extraordinaire. The following Thursday I was at Stephen's house having a plaster cast made of my face. 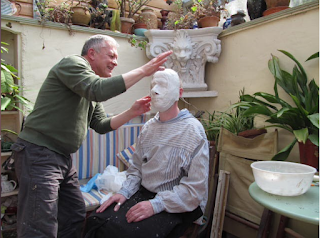 Once the plaster 'negative' is made, Stephen makes a 'positive' from it (sorry - no glasses) 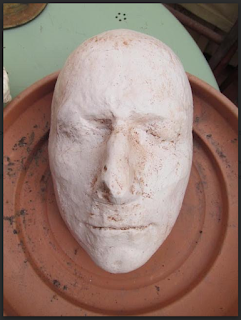 Working in clay, Stephen is then able to build up the features of the mask. 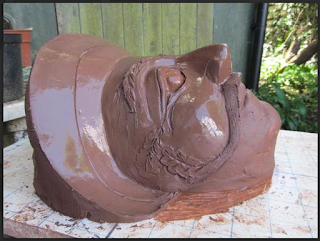 Hours of skillful sculpting, with intricate detailed items placed over paper mache and then painted. A few weeks later I return to meet 'Greenie' for the first time. 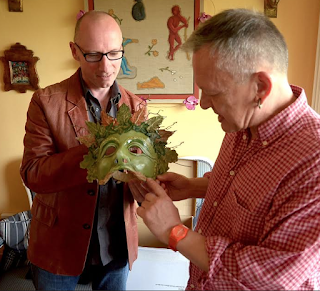 The first fitting is to make sure that I can wear the mask comfortably and also play the flute while wearing it too. 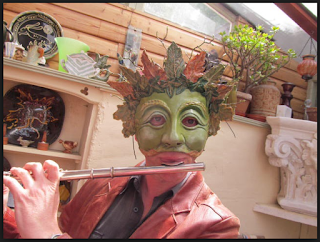 Stephen's masks are featured and worn not only by Stephen and myself but also by some of the passengers who attended the 'Folklore' music video shoot on St. Catherine's Hill near Winchester a few weeks ago. The whole of BBT wore Stephen's masks for a Prog Magazine photo shoot and as soon as the masks were on, the capering begins. Masks are very interesting things when introduced into an environment.

When Wassail was performed live during our Kings Place shows, it came of age. It was written to be performed as a piece of live entertainment. When I wear the mask live, I become the character - he makes his entrance midway through the song and he takes his bows before leaving the stage. (See Stone and Steel) I am very interested in the folklore element of masks. They tap right into the spirit of our ancestors wearing them to become something other than they were.

Wassail was nominated in the Progressive Rock Awards 'Anthem" category and also in the Classic Rock Society's 'Song of the Year' category. It has been played several times on BBC Radio 2 by legendary broadcaster Bob Harris who is a supporter of Big Big Train music. Hearing Bob's iconic voice reading out the opening lyrics to Wassail will remain with me until the end of time. 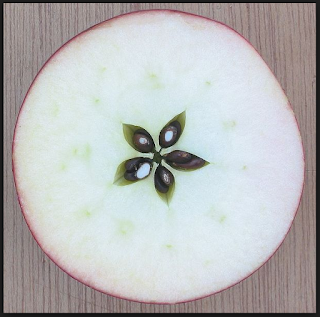