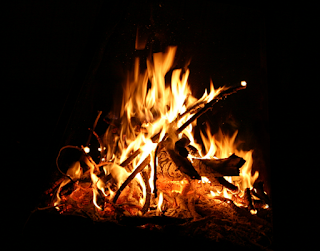 This is the first of eight blogs that will give background information about the songs on our new album.

Folkore [the album and the track] starts off where most of our ancestral stories most likely began. Around the cracking flames of the campfire. Stories told after sunset, with no daylight reassurances or distractions. The cold dark night forcing us to huddle closer together, among the security of the 'pack', beside the warm glow of the flames. The night focusses us in. Our minds become much more open to suggestion. Our imaginations are susceptible, impressionable and pliant. It is at these very moments, when the unbelievable can all too easily be believed.

The moment is right and the stage is set. Firelight makes the shadows dance. Flickering light contorts the animated features of the storyteller - transforming them into something other than they are.

Women and men, young and old - rapt listeners all. Although the older listeners have heard these stories many times before and they know what is to unfold. They too delight in the engrossed faces of the youngsters. Open mouthed and spellbound as they listen to wondrous tales. Or recoiling in fright to the comforting arms of their mothers. Caught up in the drama of the moment. Hanging on each word and every plot twist.

These tales Ignite and fan the flames of our fertile imaginations. These are our stories of love, words of wisdom, cautionary tales. Heroic adventurers featuring fantastical creatures and conniving villains. Supernatural tales, stories involving the incredible luck of particular individuals. Stories that reveal the fate of their many characters and the consequences of their actions. It is an integral part of who we are and who we think we are.  Forming the bedrock of our cultures.

Passed down by word of mouth from generation to generation - the fine details and factual information sometimes abandoned and exaggerated in favour of the drama within the story as these tales are reinterpreted from storyteller to storyteller. Country to country, each adding something of themselves to embellish the tale.

"The pen is mightier than the sword, the music of the word is scored"

Each development further enhancing the power of the word. The emergence of the written word, the development of the ink press, the incredible technological advancements of the 21st century - all fuel to our fire and grist to the mill. We are still making out own cultural folklore to this day - the addition of the press and social media allows our stories to be told at a terrific rate.

Folklore is a deliberate companion/bookend piece to Wassail. It shares the same chord sequence and it uses the same mandolin/violin/flute riff. The instrumental play out at the end of the piece features members of the band taking a short solo section then passing it on to the next player and so on until the piece concludes.

In addition to Folklore being the first track on the album and the title track of the album, it will also be the first 'single' taken from the album. A short film (music video ) has been shot to accompany it, featuring a cast of extras drawn from our fantastic 'passengers' on the BBT Facebook forum.

My friend and fellow band mate Greg Spawton will post a blog next week in which he writes about the next track on Folklore.